These names are top of the list because of their relevance to the business of laughter.

They have grown over time and are now at that level of their game where their names are recognizable without a face to it.

In fact as talents, they have all paid their dues.

And today we shall be listing those famous celebrities, plus other minor details.

The Nigerian Comedy is not just about laughter. It is a comical means through which serious issues affecting the country is sometimes expressed.

They target government and her shortcomings. They sometimes focus on society as a whole and through humor tell us truths that ordinarily people would rather shy away from.

For instance the present Nigeria story is one of hardship and frustration stemming from a government and policy that many Nigerians believe is running on script of tribalism and deliberate hypocrisy.

The only group bold enough to come out to the open and speak on the matter with both anger and spite are these famous Nigerian Comedians that will be listed here.

The very first among them to boldly call the president by his name while associating the failures of the government to him was Gordon’s.

At one time while on stage, insulting president Buhari and daring him to do his worse, comedian AY had to playfully but forcefully drag him of stage.

Another comic on this list of famous Nigerian Comedians to say his mind openly on stage while also fearlessly calling out president Buhari as the fault is I Go Dye.

But in general they are all crying out and that is what is called social responsibility.

I think Julius Agwu is a special case, he is one of the most serious advocate of God’s love and protection among our list of famous Nigerian stand up comedians.

He even had a near death experience and that event itself was self explanatory of his faith in God. Describing the experience he said:

“The truth is that I would not have been alive if not for God. I died and woke up; I literally died and woke up. I say that authoritatively because I know that I had an encounter with people that I know had died during that period. I saw my father who died about 12 years ago; he was the one that came and chased me back to the world 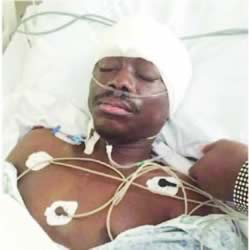 because it was not my time. I died here in Nigeria but woke up when they were taking me to the mortuary. That was the first time I had a seizure in my house but my wife stood by me. God would keep on blessing my wife; I believe that God gave me my wife and I always thank him for her. I bless God that she stayed despite everything that happened to me. They were taking me to a mortuary but to God be the glory, my hand moved and that was the point they returned me to the hospital. Here I am today. The encounter made me realise that there is nothing as good as rest. It is very important to sleep. I work so hard and I believe that of all comedians in Nigeria, I am the only one with so many brands, I have Crack Ya Ribs, Laff for Christ’s Sake and Festival of Love.”

Speaking for the first time since his second visit to the hospital over the tumours in his brain, Agwu told Saturday Beats that he had a relapse because he did not rest properly after his first surgery. “What happened was that they did an MRI scan and they detected that I had two growths. They removed a tumour at the back of my head which was the size of a golf ball and the other tumour was close to my brain. They advised me that if they touched the other tumour, it could be fatal. They gave me drugs to shrink the tumour but I did not rest well and that is why it came back last year. I did not rest at all, after my surgery in America, I resumed doing my shows. I thank God for everything.

“The truth is that I am back and better. I just want to use this opportunity to tell the people that God is great and this is a time we should all reflect on our life. I would not lie to you, things are not easy in the country and many people are running away from Nigeria. ‘Crack Ya Rib’ was the first Nigerian show that went to London and after that, everybody started taking their shows there. I thank God that ‘Crack Ya Rib’ paved the way for other shows,” 1

They even take time out to talk about religion and tribalism and the many faults they come with.

From the obvious sin of religious extortion, spiritual blackmailing to false miracles.

From tribal Intolerance to that raging fire of xenophobic hate.

All of the above, these famous Nigerian Comedians present through twisted lips contorted by witty smiles and laughter.

They indeed are messengers !

Or is it the excesses of Nigerian girls whose love for money is something to be afraid of ?

There is hardly any topic too big for these famous Nigerian Comedians to dwell on and no matter the sensitive nature they still manage to send their message across with an added dose of laughter.

He was Otaghware Otas Onodjayeke, one of the few comedians in Nigerian that are very proud to publicly show their allegiance to Warri in Delta State.

Together with others from that state he has helped cemented the idea that Warri is the actual birth place of comedy in Nigeria and on a subconscious level, we all agree!

This man is the Vampire in the mix, he hardly ages. Perpetually spotting the boyish look of a 20 years Teju. He is among the earliest Nigerian comedians that became famous on tv screen.

And he has managed to keep alive his comedy brand since then.

These famous Nigerian stand up Comedians are the mouth piece of the masses. They speak for the oppressed and underprivileged of society.

The very talented Helen Paul is the only female on our list of Nigerian stand up comedians. Do not judge this one by her gender, this one has many bags of laughter’s in her arsenal.

She is an actual Thespian, she was trained in the performing arts and recently graduated with a doctorate in Theater Arts from the University of Lagos.

The faces above are the most famous of the lot. So take your time to check them out.

But if you are a Nigerian, you already know them by now.

Thanks for reading and please do remember to share.